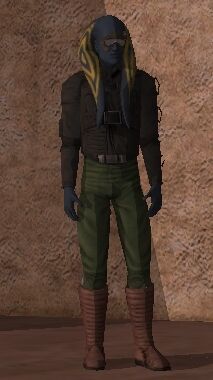 The Legacy questline is a string of lightly story driven missions that are useful for new players trying to gain experience and credits. The questline starts out on Tatooine in Mos Eisley and eventually takes players to several planets throughout the galaxy. Rewards for the questline include xp, a few million credits, and a variety of miscellaneous items such as house decorations and (mostly un-tradeable) buff items.

This quest series begins automatically after spawning into the game world. As soon as your character lands in Mos Eisley, Solo will send a message by commlink, beginning the questline with a set of missions to acquire a landspeeder.

Characters may choose to work in the Legacy Quest for either the Rebellion or the Empire. NOTE that this is not factional affiliation, and you do not need to be a member of either side's military to work for them and complete Legacy. The quests are the same, with the NPC contact sometimes being different. Completion of Legacy through the Naboo quests awards the player one of the following medals:

The stats on the medals are identical and require no factional affiliation to be worn.

Completion of the Corellian quests through Lt. Jaspers rewards the player with the following:

The first act of Legacy ends once the player recovers and drops off the four droid modules to their contact (Rebel or Imperial). An additional series of missions on Corellia have been added after act 1 to allow the player to continue the adventure. Captain Panaka of the RSF contacts the player immediately after completion of the Legacy to begin these quests.

New players who have had enough of Legacy can select and complete missions from Combat Mission Terminals instead. Alternatively, new players can talk directly to the NPC's Entha Kandela (3512, -4783), Peawp R'dawc (3468, -4672), or Purvis Arrison (3510, -4765) to take their quick tutoring quests for fast credits and rewards.

Community content is available under CC-BY-SA unless otherwise noted.
Advertisement